Glaucoma is one of the most talked-about eye conditions. But what is it? We’re here to explain!

So what is Glaucoma?

Glaucoma is a common eye condition that damages the Optic Nerve (the part of your eye that sends information from your eye to your brain) is damaged. Usually this is caused by fluid build-up inside your eye, which in turn increases the pressure around the nerve. It’s a serious condition that warrants serious attention; as if left untreated it can lead to irreversible blindness. Age is a big risk factor with Glaucoma, and the condition is most prevalent in people who are in their 70s and older. However, it can and does affect people of much younger ages too. 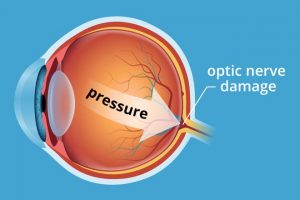 What are the symptoms of Glaucoma?

Generally, Glaucoma doesn’t tend to show any symptoms in the early stages; it’s a condition that develops slowly over many years and because of this, lots of people don’t realise they have it until it’s picked up during a routine eye examination. (Another reason regular eye tests are so important!) Once the symptoms do start to show, it usually starts with darkening around the outside of your visual field and slowly spreads inwards. Once advanced, it can be compared to tunnel-vision.

There is a less-common type of Glaucoma called Acute Angle-Closure Glaucoma that produces sudden and often severe symptoms such as blurred vision, halo rings when looking at lights, eye pain, nausea and vomiting. If you experience the symptoms listed, be sure to visit an eye doctor near you immediately so steps can be taken to non-invasively reduce the pressure in your eye and hopefully stop any damage before it happens. 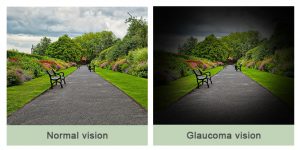 What are the different types of Glaucoma?

Primary Open-Angle Glaucoma – The most common type of Glaucoma whereby the fluid drains from the eye much slower than it should, even though the drainage system within the eye looks normal.

Angle-Closure Glaucoma – A less common type of Glaucoma where the eye’s drainage system begins to close or is narrowed, and as a result the normal drainage of the fluid is affected. This type can be either chronic (an anatomically narrow angle or temporary episodes of angle closures over time) or acute (the angle narrows or closes suddenly).

Low tension/Normal tension Glaucoma – In these types of Glaucoma, the Optic Nerve still shows signs of damage even though the pressure inside the eye is normal or low. Low blood pressure is thought to be a risk factor.

Congenital Glaucoma – This type of Glaucoma happens due to a birth defect that affects the eye’s drainage system and runs in the family.

Secondary Glaucoma – Glaucoma caused by complications of other medical conditions such as Diabetes or High Blood Pressure. Can also be caused by trauma to the eye itself.

What’s the treatment for Glaucoma?

There are many treatments for Glaucoma such as eye drops, micro-surgery, laser treatments and more. It’s important to remember that whilst these treatments can prevent any further damage being done, they cannot restore vision already lost. The treatment that’s best for each patient depends on the type of Glaucoma and how severe and responsive it is.

So, that’s Glaucoma, a condition where vision loss is preventable when caught early. It’s a very manageable condition, so if you are due an eye test and you’re putting it off for whatever reason – please think about booking in soon. It could just save your sight!